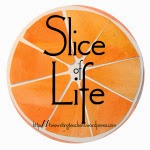 Slice of Life hosted at the
Two Writing Teachers
Join in and share a slice of your life.

For one week we are the same age.  (And that age is really bothering me.)  He is now one year older.  And it's not bothering him.  He says it's just a number.  He says that you are only as old as you feel.  He says to enjoy the life you have now.  He even says that the older I get, the longer he will have loved me.

I have never had an issue with age before.  Twenty-nine to thirty.  No problem.  Early thirties.  Easy.  I was even okay with thirty-five and thirty-six and thirty-seven.

I was okay with sharing my age. Telling my students the year I was born and letting them do the math.  I usually had to do the math too because age wasn't a concern.  I even had no issues when they started saying that I was older than their parents.

Perhaps the closest biggest step is (shhh!) forty.  That scares me a little.  Yet, I know forty is not old like it used to be years ago. (You know, when I was younger.)  Fifty and even sixty these days aren't considered old, especially when everyone is looking great and active and healthy.

Age truly can't be defined by a number.

But have I really lived a life of almost forty years on this earth?  And why am I letting thirty-eight bother me?  I still have two years (less than 730 days) before that big four-oh comes.  I need to listen to my husband.  It's just a number.  I'm only as old as I feel.  I need to enjoy my life now.  I need to let my husband love me more.

But, just so you know, I'm still cringing at the thought of thirty-eight.  (Ugh.)

Thanks for sharing your thoughts.

Popular posts from this blog

November 15, 2017
I love sharing book titles with close friends, so I'm happy you are here! I want to share a book that you must add to your to-be-read list. Ruth Ayres has a brand new book titled  Enticing Hard-To-Reach Writers   published by Stenhouse Publishers. It's another must read from Ruth. There are many professional development books available to learn about mastering our craft of teaching.   However, there are only a few that make a true impact -- and this is one book that weaves raw truth, research, practical ideas, and story all in one {cute} little package.  In  Enticing Hard-To-Reach Writers , Ruth allows her worlds to collide during the creation:  "In this book, I entwine my three story lines as educator, momma, and writer." (p. 6) And she does this in an amazing way through sharing stories of her family, adoption, children living in hard places -- and doing their best  -- and healing. She shares how we can use research to understand how to
26 comments
Read more

August 07, 2020
I read this new book: Grit for Girls and Young Women: Why the Most Difficult Challenges are So Important -- a gift from a dear friend to my daughters. She had no idea what those words did to me. Tears filled my eyes, succumbed to all the emotions of this spring and summer and the year of 2020. Especially, a summer of the not-so-relaxing, let-it-all-go, think-about-nothing kind of summer. But a summer of hearing data, growing concerns, and waiting. waiting. waiting. to hear plans for returning to school this fall. I guess I didn't realize how much I was holding in.  My ten year old daughter, Madison, walked into the room. "This book from Karen is awesome. I can't wait to read it with you. They are full of words that you need to hear, but I guess I did too --"    I caught my breath and asked, "Can I get a hug?" "Why? What's wrong, Mommy?" She pleaded as I walked over to her and we sat together embraced on the couch. I kissed the top of her hea
5 comments
Read more